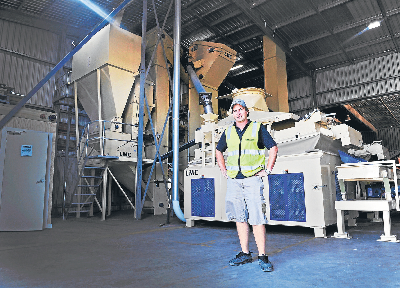 NEW state-of-the-art technology at Wimpak Export Company will allow the business to double its grain cleaning capacity.
Wimpak grain marketing head Todd Krahe said a new processing plant was designed and manufactured specifically for the Minyip company’s pulse grain cleaning operation.
‘‘We have completed the installation of an entirely new cleaning plant,’’ he said. ‘‘It is the only plant of its type in Australia for processing pulse grain.’’
United States-based business Lewis M Carter Manufacturing designed the plant. ‘‘The old plant was decommissioned on the last day of September with a planned change over
time of about six weeks,’’ Mr Krahe said. ‘‘Installation took a little longer than expected, but we now have the plant fully operational.’’ Mr Krahe said the plant represented
a huge step forward in technology. ‘‘The majority of the system is automated and controlled by a single touch-screen,’’ he said. ‘‘We can even link into the control system from a remote
computer or iPad to monitor production.’’ Mr Krahe said the upgrade was needed to increase throughput capacity. ‘‘This has been achieved as we now have the capacity to clean about double
the amount of product an hour, compared with the old plant,’’ he said. Mr Krahe said the electrical work formed a major part of the upgrade. ‘‘Everything relating to the old plant was
removed and new systems were designed and installed from scratch,’’ he said. ‘‘This was a combined effort between Laser Electrical Horsham and Laser Electrical Ballarat.’’ Mr Krahe said
Wimpak used Wimmera resources where possible for each step of the installation. He said this included welders, crane hire, electrical work, fabricators and consumables.