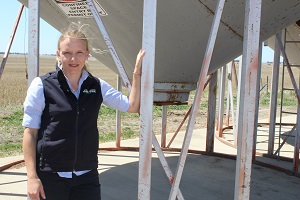 “We think we are well positioned within the pulse market in this area, which is a key producer of pulses.
“Our long-term aim is to probably double from that 50,000 tonne mark and get up to around 100,000 tonnes.”
Ms Cameron said Wimpak as a small, farmer owned business, had a point of difference against its major buyer competition in the pulse space.
“Other pulse buyers are part of big corporations, but we are still locally owned and operated and I think it is good for growers to have this type of option.”
Wimpak has 24 owners, who Ms Cameron said were all farmers or ex-farmers and has bought grain from over 400 growers, primarily across western Victoria.
She said the company currently worked with a number of Australian-based pulse buyers, who mainly buy product packed at the Minyip facility.
“We haven’t got into the export space in our own right, and we’re comfortable with the Australian businesses we deal with, we’re happy with our counterparty risk, which is very important for a smaller business.”
She said the company had been around since 1998 and prided itself on remaining a steady and reliable payer of bills to pulse growers in what is regarded by croppers as a volatile space.
Wimpak is planning to further improve and diversify its site, a strategy Ms Cameron said is already paying dividends.
“We’ve got a hammer mill here and that allows us to value add the by-product generated by the cleaning process.
“There are obviously the seconds, or stock grade quality pulses, but aside from that, we are talking about the ‘offal’, which is the husks and other material.
“This offal can all be put through the hammer mill and it creates a high protein mix called pollard, which is in demand from stockfeed manufacturers.
“We’ve got a 5-10 year plan to expand and improve the site further to create further opportunities.”
The cleaner’s manufacturer, LMC, is based in Georgia, in the United States.
LMC has made cleaning equipment for Australian agribusinesses before, such as almond cleaning gear used in north-west Victoria, but this is its first foray into a pulse cleaning system.
The majority of the Wimpak plant is automated, which Ms Cameron said was a big step up.
It is possible to link in and operate the machine remotely.
The overhaul cost an undisclosed amount.

Article and Photo Curtsey of Stock and Land