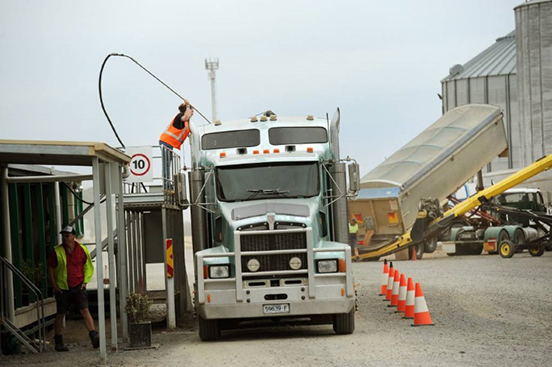 Grainflow Dimboola site superviser Ken Ough said harvest was ticking along slowly. “It’s not going too good – all barley has gone feed and we’ve had high protein wheat. “It was what we expected with the dry finish.”
Mr Ough said while prices overall weren’t fantastic, some growers were getting more than they initially thought. He said the site opened on November 9 – two weeks earlier than last year. “We will probably finish about three weeks earlier too,” he said.
GrainCorp’s latest harvest update shows deliveries of wheat and barley have started in northern areas of the state. “Canola is being windrowed in the western districts and initial deliveries are expected later this week,” the report said. Birchip Cropping Group chief executive Chris Sounness said harvest was now under way for most of the Wimmera. ”Some areas are slightly better while others are slightly worse,” he said. “Farmers start with their best paddock though, so the worst is still to come. That’s the economics of harvest.”