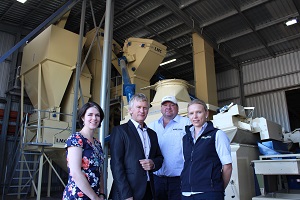 ‘‘We basically had to start again from scratch.’’ Mr Milne said the new system was safer to use. ‘‘It now uses an air system instead of conveyor belts. It is much safer and can be cleaned easier,’’ he said. ‘‘The open construction of the cleaner also allows the processing of grain to be clearly monitored and the ease of changing between varieties and seed types will significantly reduce downtime. ‘‘It is basically like a Meccano set, where we can replace parts when they need it without having to replace the whole thing.’’ Mr Milne said Wimpak could now produce better quality seeds and clean grain faster. Wimpak general manager Jo Cameron said the plant would offer a more efficient service to growers. ‘‘We had a tough season last year, so it might be a slow year to start off with,’’ she said. ‘‘Farmers are resilient though and going forward, fingers crossed we get a good year. ‘‘If we do get a good year, we are now well placed to cope with the capacity.’’ Member for Lowan Emma Kealy officially opened the processing plant. Ms Cameron said Wimpak had the ability to clean grain that fell outside the Australian Pulse Standards, which allowed growers to obtain premium prices for their cleaned product. ”